Misrepresenting Halliday (1994) On The Notion Of Delicacy

As for the concept of 'delicacy', it is not mentioned at all in IFG. However, it is illustrated at various points in the book in one of its two main "Categories" senses, i.e., in terms of the 'primary', 'secondary' and even 'tertiary' structures that are shown for the 'thematic' and 'interpersonal' structures that Halliday recognises in the clause. (For a discussion of the relevance of 'delicacy' to a modern theory of SF syntax, see Section 10.3.4 of Chapter 10.)

[3] To be clear, here — and in Section 10.3.4 — Fawcett mistakes delicacy, which, in SFL theory, is an elaborating relation in paradigmatic systems, with composition, which is an extending relation in syntagmatic structures. The structures that Fawcett discusses are Finite and Subject as components of the Mood element of structure, and textual, interpersonal and topical Themes as components of the Theme element of structure.

As can be seen from the systems of Theme and Mood (Halliday & Matthiessen 2014: 106, 162), below, these "secondary" structural elements do not feature as more delicate systemic choices: 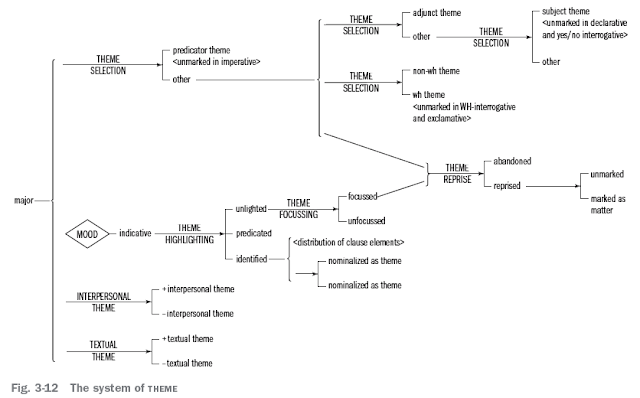 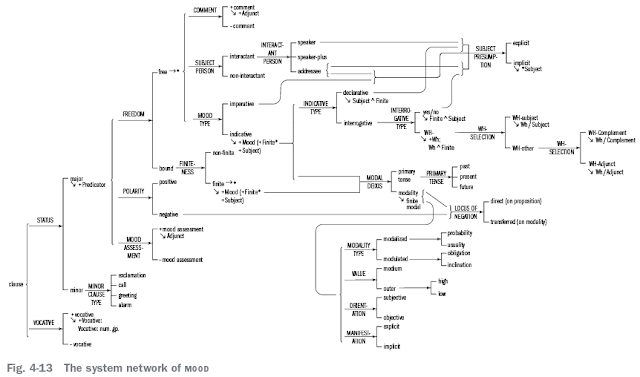 Most Read Posts This Week

Most Read Posts This Month

Most Read Posts This Year

My Other SFL Blogs